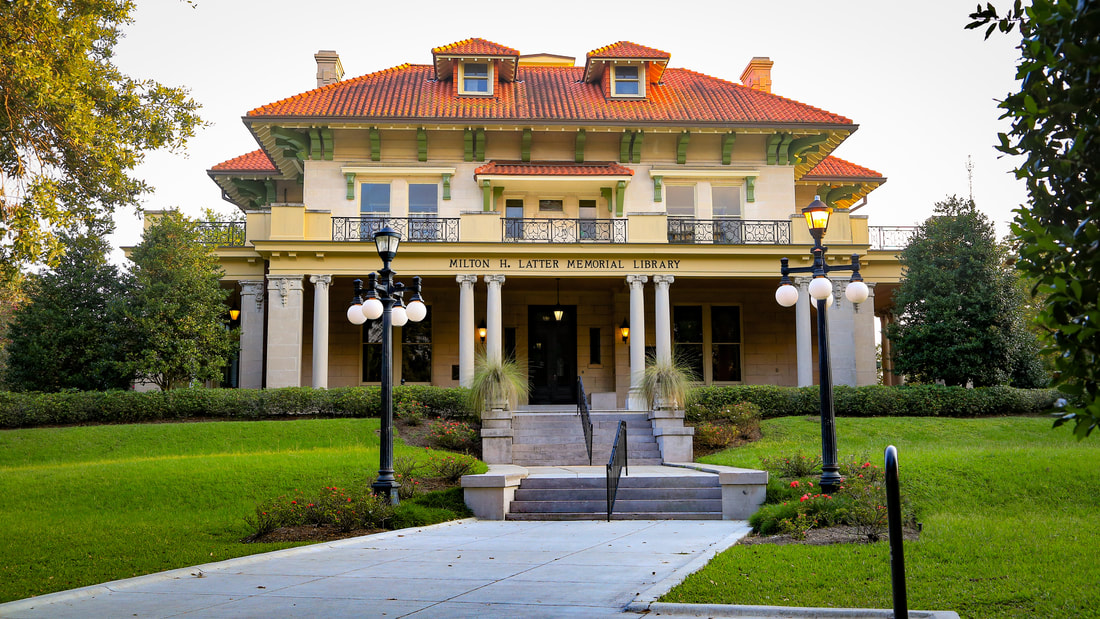 THE LIBRARY
Today, the Latter Library exists not only as an information and education center, but as a reminder of more elegant and gracious times on St. Charles Avenue. Latter Library circulates over 200,000 items each year and its collection includes nearly 50,000 books and materials. Recent renovations to the Latter Library have included a roof replacement, HVAC upgrade, refinishing of hardwood floors, fresh paint throughout the interior, and new carpet in the Children’s Room, stairs, and 2nd floor. The Latter Library was temporarily closed July 28, 2013, during the renovation period and it reopened October 30, 2013. Latter Library is one the city’s monuments to the past, which has acquired new meaning through service to the present. It is a fitting memorial to Milton H. Latter and the generosity of his family.
​
The Milton H. Latter Library was once a stately mansion for a noted turn-of-the century family, an elegant retreat for a silent screen star and a festive center for weeklong parties. It now serves the Uptown community as a branch of the New Orleans Public Library.

THE ISAACS
Mr. and Mrs. Marks Isaacs built the mansion in 1907. It is set on an entire city square of ground. The Isaacs were the proprietors of a department store in New Orleans. In addition to the Isaacs, their two daughters and a son, the mansion housed 12 servants, a cow, many chickens and dogs, and one of the first automobiles in New Orleans. The Isaacs commissioned architects Favrot and Livaudais to design the house. They hired George Glover to construct the mansion, which a Chicago-based firm decorated. Local craftsmen, Pettit and Boh, hand carved the Flemish-style woodwork of the mantels. The mirrors and chandeliers were imported from Czechoslovakia. The mahogany for the paneling and staircase came from South America. Local artist, John Geiser, painted the Dutch murals and German mottoes in the Blue Room. The two front rooms have fresco ceilings signed “De Rudder, Paris 1858” which were imported from France. These ceilings originally graced a mansion in the French Quarter. The wall panels of cherry-red damask are from the original Louis XIV French Parlor.

THE WILLIAMS
In 1912 after the death of Mark Isaacs, Frank B. Williams purchased the house. His son, Harry Williams, was a well-known aviator. He was vice-president of the Wedell-Williams Air Service

Corporation which built many of the world’s fastest planes. Harry Williams married the silent film star Marguerite Clark in 1918 at the height of her career. He brought his bride to New Orleans to live in the mansion his father bought. Clark gave up her film career for marriage and she described the abrupt end of her career by saying, “I knew enough to go home when the party was over and the guests were gone.” A friend reminisced that the couple did not become a part of the native New Orleans social scene, but were admired at a distance by the residents. Marguerite was the donor of many anonymous gifts to needy persons in the area, involving herself in the community in her own quiet way. Harry Williams died in a plane crash in 1936. Three years later, Marguerite moved to New York to live with her sister. She died in 1940 at the age of 53.

THE EDDYS
After Marguerite’s death, the mansion was sold to Robert S. Eddy, a local horse racing man. Eddy owned the Fairmont Track in St. Louis and others around the country. Eddy also owned a furniture store off of Canal Street. He filled the house with magnificent furnishings and Oriental rugs. His family included his wife, son, daughter-in-law and granddaughter. His granddaughter was born in the house. The Eddys held week-long parties for their friends during the racing season. After the death of Mrs. Eddy, the family stayed in the house for a time, but the ill- health of the young granddaughter prompted them to move to Florida.

THE LATTERS
The Eddys sold the house to Mr. and Mrs. Harry Latter in 1948. Their dream was to transform the mansion into a public library as a memorial to their son, Milton, who lost his life at Okinawa during World War II. The Latters purchased the house for $100,000 and donated $25,000 for alterations. The city spent an additional $15,000 converting the mansion into a facility unique, at that time, in United States library history. The city formally dedicated the building on October 31, 1948, making the Latter’s dream a reality. By the 1980s, after nearly four decades of service, the Library showed signs of serious wear. The library administration closed Latter Library in 1983 for extensive restoration and renovation. The Latter family again showed its support for the library. Shirley Latter Kaufman presented the city with a significant monetary gift to begin renovations. Under the direction of Kaufman, Allen House of Louisville, Kentucky decorated the renovated building. The Latter Library reopened in July of 1985.